With our SaaS universe average enterprise value multiple of estimated 2021 revenue hitting 17.9, above the previous high of 17.6 in December, the question is how much upside remains. Before getting too nervous, we note the average multiple of estimated 2022 revenue is much lower at 14.1 due to the group's rapid growth. Further, forward revenue expectations tend to be conservative, implying the real 2022 multiple will be still lower, maybe around 13. So the upside potential of our SaaS group tends to increase over time, and returning to the multiple of forward revenue seen last December implies roughly 30% upside from today.

Of course, December valuations may not be a good benchmark. In our January 2019 SaaS report we presented a SaaS model discounted cash flow analysis based on three variables: initial growth rate, the rate of growth rate decay, and terminal cash flow as a percent of revenue. Using this framework, it is difficult to justify an enterprise value multiple of current revenue over 10 unless the growth decay rate is 3% or less. (We assumed initial growth rates of 30% and 20%; very high initial growth rates could justify higher multiples.) This may also explain why many acquisitions in the SaaS space are done at multiples of 10 times revenue or less, with the notable exception of Slack (WORK), which is selling for an enterprise value that was approximately 26 times expected forward revenue at the time the deal was announced. 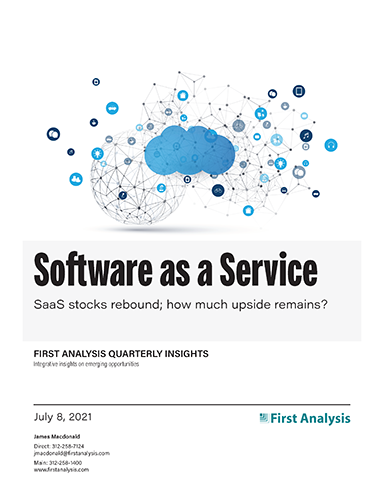