The SaaS stock correction that took hold in November appears to have been triggered by Federal Reserve hawkishness, which is expected to lead to higher interest rates and less quantitative easing in 2022 and beyond. According to this reasoning, future earnings are worth less as interest rates increase (and most SaaS earnings are years away), meaning valuations decline. However, this assumes investors were using Treasury rates as the discount rate for their discounted cash flow (DCF) calculations rather than the risk adjusted rate of around 10% for public companies that we typically use. Further, most public SaaS companies are well capitalized and have such solid growth prospects that they should be relatively insulated from any economic impacts their customers experience from modest Fed tightening. We believe the more salient factor is that Federal Reserve policies created an environment where there were few attractive alternatives to investing in stocks, leading to momentum investing and a simple case of overvaluation. 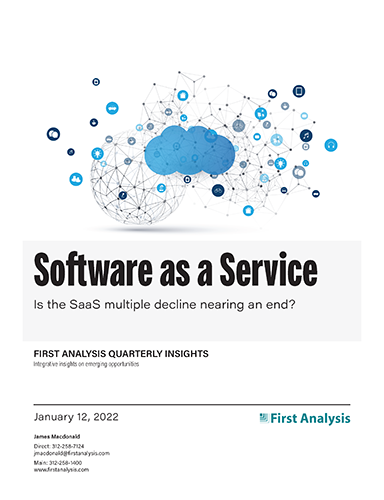