Guidance and the growth curve

We assessed the change in SaaS company revenue expectations by analyzing the data from a representative subset of our SaaS universe companies: those that provided annual revenue guidance in both 2021 and 2022 excluding companies we categorize as vertical SaaS and other. This subset of companies issued 2022 revenue growth guidance averaging 25.7%, 2.6 points higher than the average 2021 revenue growth guidance of 23.1%. Much of the increase comes from companies in the data visibility, cybersecurity and future-of-work sectors. As usual, 2021 guidance turned out to be conservative: Actual average revenue growth was 33.2%, 10.1 points better than initial guidance.

SaaS stocks were one of the hardest hit sectors in the recent downturn. Our broad universe of SaaS stocks dropped an average 20.2% in the March quarter compared to a 4.9% loss for the S&P 500. Losses were significantly worse before an upturn at the end of March. The quarter-end average enterprise value multiple of 2022 estimated revenue dropped to 11.2 from 13.9 last quarter. The average revenue multiple is 8.7 for 2023. The two subgroups that lost the least were vertical SaaS, down 6.7% on average, and cybersecurity, down 10.1% on average. The two subgroups that lost the most were Internet of Things, down 32.2% on average, and "other," down 27.2% on average. Anaplan (PLAN) was the stock that gained the most, 41.9%, due to a proposed acquisition, followed by Splunk (SPLK), which was up 28.4% as it named a respected new CEO. The biggest declines were Weave Communication's (WEAV) 60.7% and Expensify's (EXFY) 60.1%; both companies came public at high multiples in the September 2021 quarter. 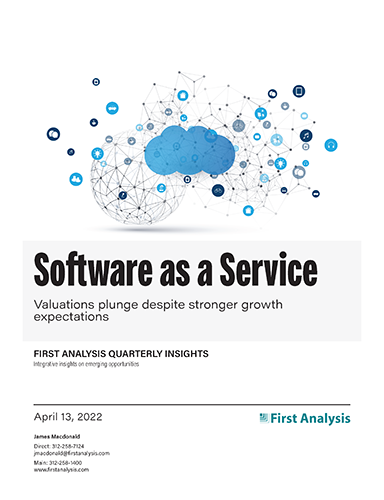