Have SaaS stocks hit the bottom?

Our SaaS universe stocks dropped 30.3% on average in the June quarter, worse than the 16.4% drop for the S&P 500, which joined the SaaS sector in bear market territory with total declines over 20% from their peaks. The average SaaS company enterprise value multiple of estimated 2022 revenue at the end of the quarter dropped to 7.5 from 11.2 at the end of the March quarter and to 5.9 for 2023 estimated revenue from 8.7 last quarter. At the same time, the estimated revenue growth outlook for our universe is essentially unchanged. While analyst estimates for growth may come down a bit from current levels due to a slowing economy or the higher dollar, we believe our SaaS universe has much less dependence on the economy and lower foreign exposure than the broad market.

Zendesk's (ZEN) June 24 decision to sell itself to private equity firms Permira and Hellman & Friedman for $10.2 billion ($77.50 per share, 6 times estimated 2022 revenue), after foregoing a higher offer in February and taking itself off the market on June 9 was emblematic of the valuation declines and set a new valuation benchmark for private equity purchases of companies committed to selling. The stock had traded as high as $153 per share in the 2021 first half. While we believe there could be strong demand from private equity buyers for additional SaaS company purchases at current prices, deals may be hard to consummate since recent open-market buyers may not want to sell at a loss. 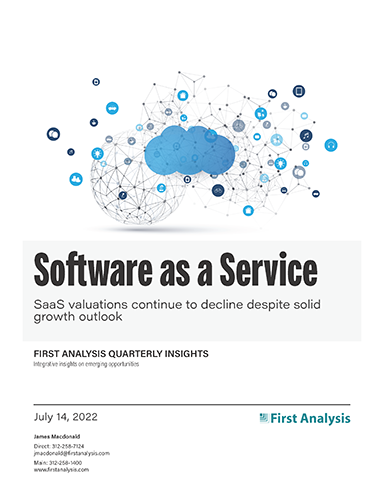