Our SaaS universe stocks dropped 1.6% on average in the September quarter, better than the 5.3% drop for the S&P 500. The average masks the market turmoil in our 98-stock universe, as seven stocks gained over 30% and 10 stocks lost over 30%. Our average SaaS enterprise valuation multiple of 2022 estimated revenue dropped to 6.9 from 7.5 last quarter, and for 2023 estimated revenue, it dropped to 5.5 from 5.9 last quarter.

Our SaaS subgroups also performed disparately, with the enterprise productivity group gaining 4.0% on average in the September quarter after big declines last quarter and the healthcare group declining 17.9% on average after being the best performer last quarter. We believe the bear market hit some companies and sectors earlier than others. Weave Communications (WEAV) bounced 66.1% off its depressed level last quarter, and ChannelAdvisor (ECOM) gained 55.4% on a takeover offer. On the downside, Agora (API) dropped 44.7% as China concerns continued, and 2U (TWOU) dropped 40.3%. 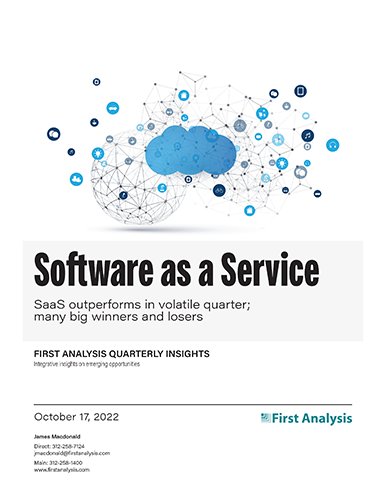