The average stock in our SaaS universe declined 3.6% in the December quarter, underperforming the 7.1% gain for the S&P 500, which recovered somewhat from its October lows. Once again, performance varied much more widely for individual companies, with five gaining over 30% and nine losing over 30% in our current 96-company universe. (The tally was seven and ten in the September quarter.) Three of the five biggest gainers were the subject of acquisition announcements. The average SaaS enterprise value multiple of estimated revenue was 6.3 for 2022, down from 6.9 last quarter, and 5.2 for 2023, down from 5.5 last quarter.

The vertical SaaS group had the largest average share price decline over the quarter: 15.8%. The future-of-work group gained the most: 4.8%. After several quarters of outperformance, the average cybersecurity company share price declined 8.4%. UserTesting (USER) gained 91.6% on a takeover offer. Science 37 (SNCE) dropped 74.2% as growth slowed and losses increased. 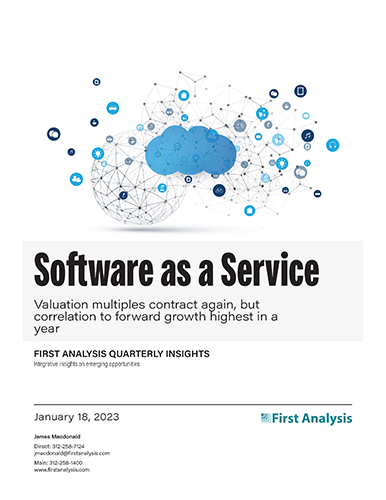